Names and Symbols for Elements and Compounds

Names and Symbols for Elements and Compounds

In this lesson we will learn how to write and interpret chemical formulas for elements and compounds. 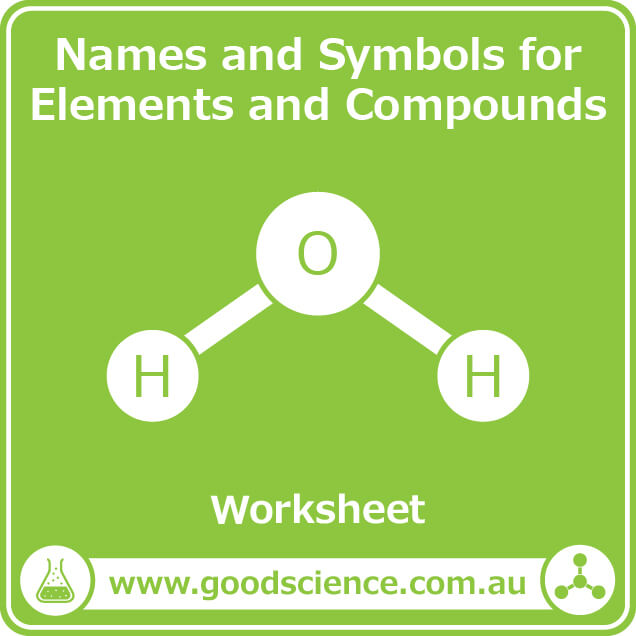 These chemical symbols and formulas provide a quick and universal way of identifying pure substances in chemistry.

The first letter is written as a capital and the second letter, if there is one, is written in lowercase.

Carbon can be represented by the symbol C.

Neon can be represented by the symbol Ne.

Silver can be represented by the symbol Ag.

Often the symbols are based on the Latin name for the element, so it isn’t always obvious why an element has a particular symbol.

The symbol “C” for carbon is based on the Latin word “carbo”, meaning “coal”.

This is quite similar to the English name.

The symbol “Ag” for silver is based on the Latin word “argentum”, meaning “shiny”.

This is very different to the English name.

For example, try learning the names and symbols of the first 20 elements, as you will encounter these a lot in chemistry. They are listed in the following table.

1. Chemical symbols of each type of atom.

2. Numbers (subscripts) indicating how many of each atom is in a molecule or subunit (if there is more than one).

Water can be represented by the chemical formula H2O.

The symbols H and O show that a water molecule is made up of hydrogen atoms and
oxygen atoms.

(We could also say that water is formed from the elements hydrogen and oxygen.)

The subscript 2 after the H indicates there are two hydrogen atoms in a water molecule.

No subscript after the O indicates there is one oxygen atom in a water molecule. 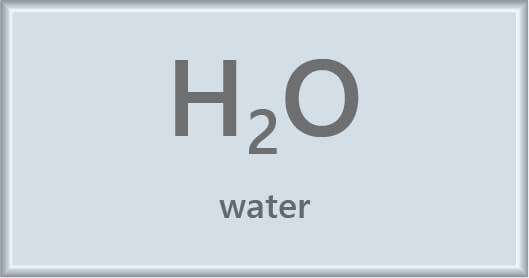 Calcium hydroxide can be represented by the chemical formula Ca(OH)2.

The symbols Ca, O and H show that calcium hydroxide is composed of calcium, oxygen and hydrogen atoms.

(We could also say that calcium hydroxide is formed from the elements calcium, oxygen and hydrogen.)

No subscript after the Ca indicates there is one calcium atom in a calcium hydroxide molecule.

The subscript 2 indicates there is two of everything inside the brackets.

Therefore, there are two oxygen atoms and two hydrogen atoms in a calcium hydroxide molecule. 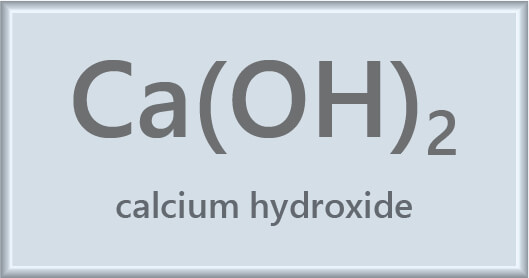 However, the names for most compounds, such as methane, ethanol and glucose, don’t provide enough information to determine their formulas.

Some compounds that you will encounter regularly in junior chemistry are shown in the following table.

Some Things to Remember

The correct symbol depends on whether you are writing it to represent the atom or the element (the actual substance), which is made up of molecules. 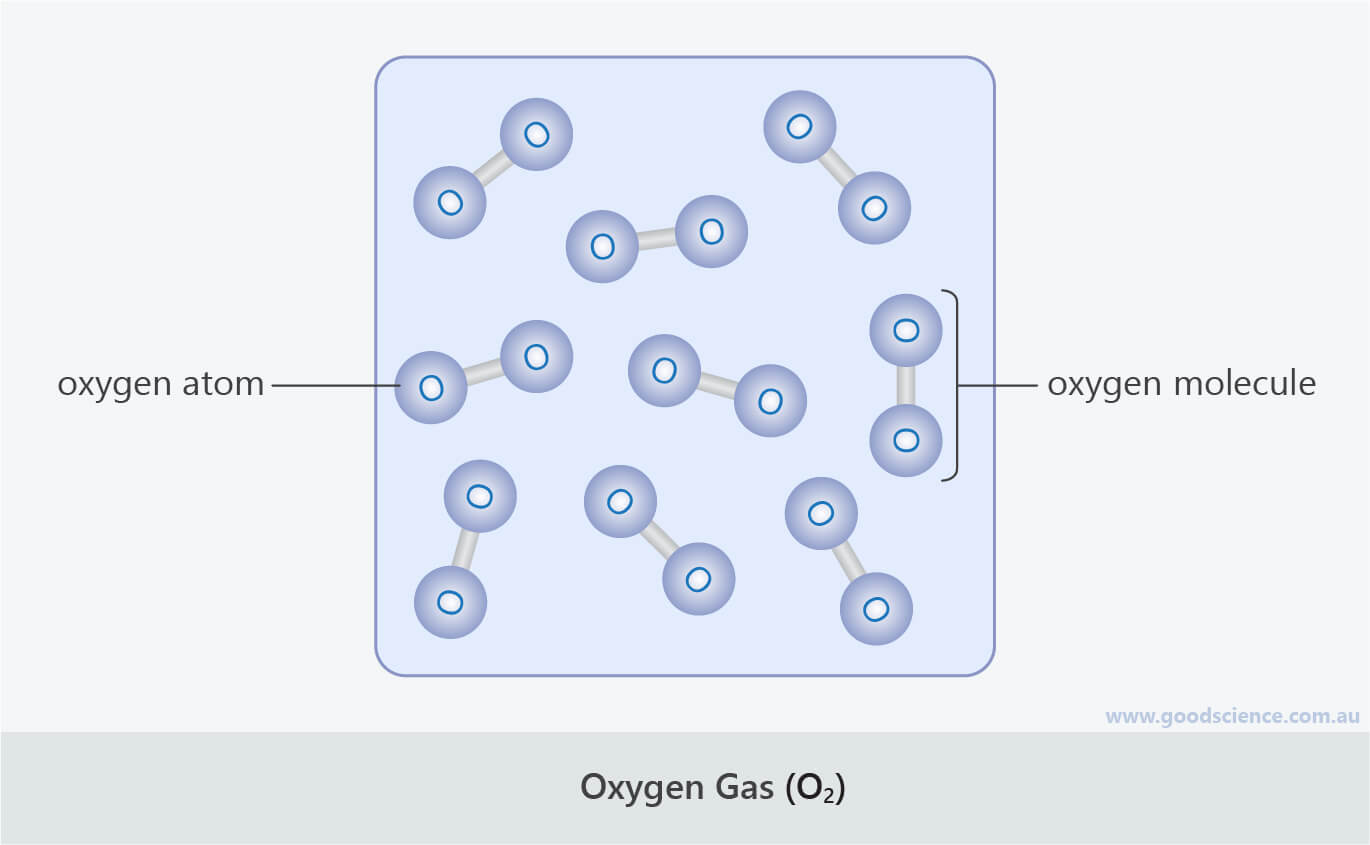 Oxygen atoms have the symbol “O”, but since oxygen gas is made up of molecules containing two oxygen atoms, its symbol is “O2“.

For example, there is a big difference between Co and CO. One is a metal element and one is a compound formed from two non-metal elements.

By remembering this, you can also quickly determine if a substance is an element or a compound by checking if it contains one or more than one capital letter in its formula.

For example, the formula for acetic acid (CH3COOH) has carbon, hydrogen and oxygen in more than one place. (It is written like this to reflect the structure of the molecule). 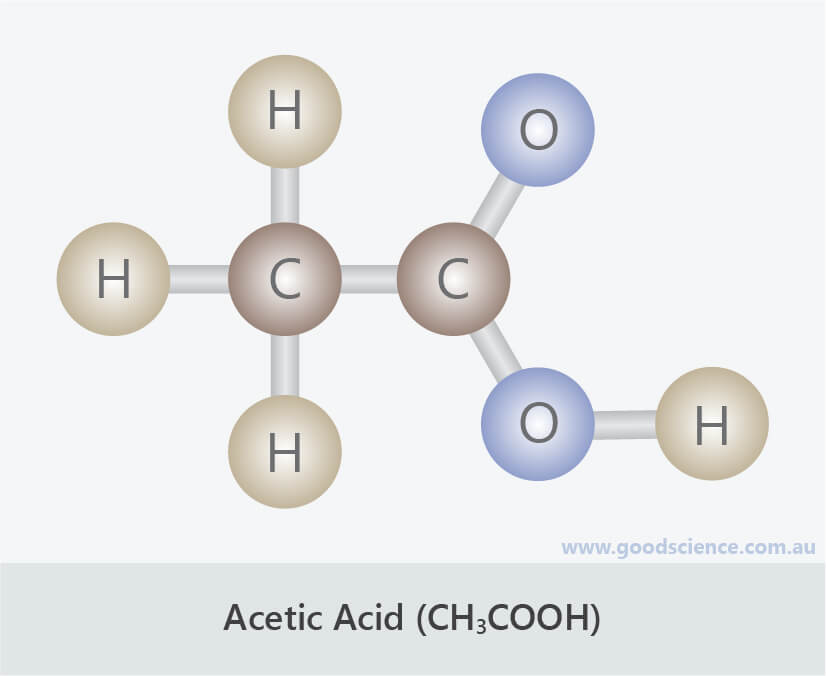 Sometimes the same type of atom can appear in more than one place in a molecular formula.

The first letter is a capital and the second letter, if there is one, is lowercase.

The formula represents the number of each type of atom in a molecule.

It is therefore a combination of the symbols for the different atoms and numbers (subscripts) indicating how many of each atom is in a molecule.

Save 20% on class sets of print workbooks during July! Enter code TERM3 at checkout. Dismiss